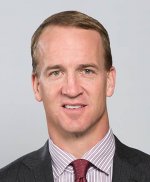 The 2019 Exchange connects key healthcare stakeholders, advocates and patients in an effort to create awareness and support patients in affording life-saving treatments that lead to more good days. We are pleased to announce Peyton Manning as keynote speaker during this annual event.

Legendary quarterback Peyton Manning, the NFL's only five-time Most Valuable Player and a 14-time Pro Bowl selection, has earned his place among the greatest quarterbacks in league history as a leader in nearly every statistical passing category.

During the 2015/2016 season, Manning led the Denver Broncos to a 24-10 win over the Carolina Panthers in Super Bowl 50, making him the first starting quarterback in NFL history to win a Super Bowl with two different teams.

Manning entered the NFL in 1998 with the Indianapolis Colts as the first overall draft pick. He amassed the most career touchdown passes in league history in addition to ranking first all-time in completions and passing yards.

Named a first-team All-Pro selection by the Associated Press on seven occasions, Manning owns more postseason berths and 300-yard passing games than any quarterback in NFL history. A native of New Orleans, he was named the No. 1 greatest athlete to hail from the state of Louisiana by The Times-Picayune.

In 2013, Manning was named Sportsman of the Year by Sports Illustrated. In his first year with the Broncos in 2012--and after missing the entire 2011 campaign with a neck injury--Manning finished as the Associated Press NFL Comeback Player of the Year and runner-up for the league's MVP.

During his first 14 NFL seasons with the Colts, Manning set club records in nearly every career passing category. He led the franchise to its first World Championship in 36 years during the 2006 season, earning MVP honors in the Colts' 29-17 win over the Chicago Bears in Super Bowl XLI.

During his time at the University of Tennessee, Manning epitomized the term "student-athlete." He claimed 43 records at the school, conference and national levels while graduating with Phi Beta Kappa honors.

He led Tennessee to an SEC Championship as a senior in 1997 and earned consensus All-America honors. Following his senior season, Manning was honored with the Sullivan Award for the nation's top amateur athlete based on character, leadership, athletic ability and the ideals of amateurism.

Manning has continued his efforts off the field and was honored as the recipient of the Byron "Whizzer" White Humanitarian Award and the NFL's Walter Payton Man of the Year in 2005, the Bart Starr Award in 2015, and the Lincoln Medal in 2017.

Manning serves as a member of the American Red Cross National Celebrity Cabinet and The Pat Summit Foundation Advisory Board. He and his wife, Ashley, established the PeyBack Foundation in 1999 to promote the future success of disadvantaged youth by assisting programs that provide leadership and growth opportunities for children at risk.

The PeyBack Foundation has provided more than $13 million of impact to at-risk youth through its grants and programs since its inception.

Peyton Williams Manning was born on March 24, 1976, in New Orleans. He and Ashley have twins--a boy and a girl, Marshall Williams and Mosley Thompson.