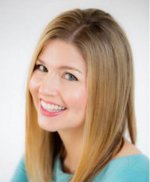 The 2019 Exchange connects key healthcare stakeholders, advocates and patients in an effort to create awareness and support patients in affording life-saving treatments that lead to more good days. We are pleased to announce Courtney Clark as a featured speaker during this annual event.

At age 26, she beat cancer. But five years later, doctors told her that a routine scan of her brain showed an aneurysm that was about to rupture.

Courtney had a series of three brain surgeries in 2011 to remove the aneurysm. During those months she spent lying in bed, in pain so intense she wanted to die, she realized she had a choice for how she could move forward. Now she teaches others how to make that same choice.

She designed her presentations to help organizations adapt to change and crisis when the stakes are high. She’s done the research and she’s lived it: she knows that resilience in the face of major stress is possible, and she know how to get it done. Audience members who hear her presentations say her strategies make it easier to manage change, cope with anxiety, bounce back, let go of “the plan,” and get clarity when life, love, or work throw you a curveball.

She love to work with what she calls “Pillar Professionals”TM – people whose roles require they remain solid, like a pillar, regardless of chaos or change around them. Typical Pillar ProfessionalsTM are often found in education, healthcare, administration, customer service, sales, and IT. The people in these roles are called on to be highly resilient because of the pressure of their work and their critical position at the foundation of their organization.

When she’s not on stage working with one of her incredible clients as a motivational speaker, she’s serving her community. In fact, her research shows that giving back to others is the single best way to get perspective on our own struggles. So she volunteers as the President of the Austin chapter of the National Speakers Association, and she’s on several nonprofit boards. Courtney got her Masters Degree in Philanthropy from Saint Mary’s University of Minnesota.  She’s been honored with the Leadership Austin Ascendant Award, as well as her high school’s Distinguished Alumnae Award.  She has also been recognized by Austin Monthly magazine as one of “20 in their 30s,” and by GivingCity magazine as one of 2012’s “New Philanthropists.”

But her volunteer work also gave her the best gift ever. Right after she launched a small nonprofit in her hometown of Austin, Texas, Courtney and her husband Jamie were at a volunteer day when they met a young high school student with dreams of college and success as a musician.  Anthony is now a college graduate, a small business owner, and their son! While Anthony soaks up the LA sun, Jamie and Courtney live in Austin, Texas with so many rescue animals they’ve lost count.